The Breakdown's best of the best in volleyball 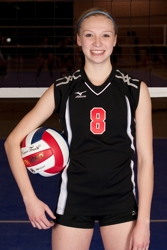 After a season in which Lakeville North senior setter Kellie McNeil claimed every team and individual honor in front of her, yet another comes the way of the catalyst of the Panthers' state championship team.  Today, the University of Minnesota-bound senior was recognized as the Breakdown's Overall Player of the Year for Minnesota high school volleyball.

A 5-foot-11 setter, McNeil is regarded as one of the best at her position in the entire nation and paced a near-perfect 31-1 season for North.  She racked up a state-best 1,133 set assists and added 119 kills, 144 blocks and 61 service aces.

McNeil leads a very talented group of players honored in our annual "Minny" awards, designed to recognize the best of the best in Minnesota high school volleyball.

The Breakdown players of the year by class are: 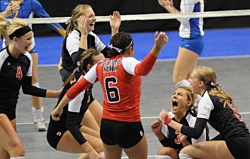 After coming so agonizingly close to a state title so many times, longtime Lakeville North coach Milan Mader broke down as his Panthers closed out a 25-13, 25-18, 25-13 victory in the Class AAA state championship over Wayzata.  Mader, whose teams have finished second five times in his 35-year career, soon turned his tears to smiles as he posed for photos with players and fans, some of whom were former players from as far back as the late 1970s.

"It's a very special time," said Mader.  "I don't have too many years left.  I'm a very emotional person and I'm not afraid of it.  I always wanted this for the school and the kids."

Kids is probably the right description for his state champions, as three freshmen played key roles -- outside hitters Taylr McNeil (27 kills) and Alyssa Goehner (11 kills) and libero Abby Monson (seven digs).  They never showed the nerves or inexperience expected from freshmen, although they certainly benefited from the leadership of Miss Volleyball Kellie McNeil (36 assists), a stabilizing force at setter.

"It's an unreal, amazing feeling," said Kellie McNeil.  "If I could do it over again, I would."

The Panthers (31-1) lost just once all season, but it was to Wayzata (30-3) in an early-season tournament.  North made sure there would be no repeat, using a big run to turn a 12-all tie in the first set into a 25-13 victory.  From there, a handful of other big runs closed out the match in straight sets. 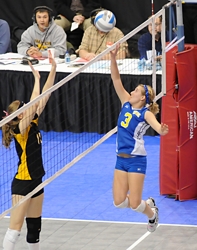 On Saturday night, Wadena-Deer Creek could finally talk volleyball.  All season long, the Wolverines were badgered by media wanting to discuss the community's recovery from June tornadoes that tore apart the town, ripping through the high school, obliterating coach Sue Volkmann's farm and throwing lives into confusion.  They dutifully answered every question, yet never let their focus ever shift from the volleyball court -- where life was more settled.  With a three-set sweep of top-seeded Hutchinson, 25-20, 25-19, 29-27, Wadena-Deer Creek (33-0) completed a perfect season on the court with a Class AA state title.

"I'm so proud of our community," said coach Volkmann, who was able to joke that the team arrived in a Wednesday night thunderstorm, then had to endure a blizzard on Saturday.  "They came down through all the weather.  It must really follow us.

"I'm afraid I'm going to wake up and it's not going to be true.  You don't think you're going to go undefeated, we just wanted to get back to state for our seniors." 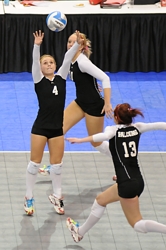 When the season began in August, Wabasha-Kellogg coach Taryn Biever listed five goals for her team to accomplish.  The first was perhaps the most difficult, find a way to end the eight-year reign of Bethlehem Academy in Section 1A.  Once accomplished, the rest fell like dominoes for the Falcons, who claimed the Class A state title with a three-set sweep of Martin County West, 25-23, 25-22, 25-17.

"That's all we wanted," said senior middle hitter Amanda Feils.  "We worked so hard from the start of the year just to beat Bethlehem Academy.  But then we had to refocus on the unknown."

Wabasha-Kellogg rallied from early deficits in each of the first two sets to claim victory.  Ball control was key, as the Falcons had few passing errors and also took advantage of nine service errors from the Mavericks.

"We worked extremely hard on our serve-receive," said coach Taryn Biever.  "Seventy percent of our practices are ball control.  We just had to be mentally tougher and more focused and under control."

Feils led the way in the state final with 11 kills and three solo blocks, while fellow middle Emily Huth had 13 kills.  Katie Cavalco and Mariah Iverson-Jones each chipped in with eight kills.  Sophomore setter Kalyn Biever racked up 34 set assists and libero Katlyn Peters had 19 digs for the Falcons (33-1).

Coach of the Year 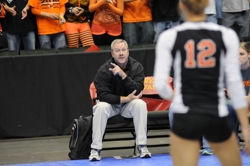 When the season began, not many expected Marshall and coach Dan Westby to get back to the state tournament for the 10th straight season.  After all, Westby had lost nearly every key member of last year's state championship team and had to rebuild while also contending with high-powered and top-ranked Jackson County Central in Section 3AA.  Yet if experts have learned anything, it's not to underestimate Westby and the Tigers.  He guided a young team back to state after upsetting JCC in the section final, ending with the Class AA consolation crown.  For those accomplishments, Westby was recognized today as the Breakdown's Coach of the Year award winner.

Westby joins a distinguished group of coaches honored in each class, including:

Best of the best "Minny" Awards

Team of the Year: Wadena-Deer Creek.  The Wolverines capped an undefeated 32-0 season with a three-set sweep of top-ranked Hutchinson in the Class AA final.  W-DC only lost two sets all season, showing its dominance (and the Wolverines were also the lone non-Class AAA team to advance to the semifinals of our preseason tournament in August).  The story throughout the season was the school's perserverance in the face of summer tornadoes that tore apart the town, but they also made their mark on the volleyball court.

Honorable mention: Lakeville North.  The Panthers finally claimed their first state title for coach Milan Mader, sweeping the only team that beat them during a 31-1 season (Wayzata).  North was a great mix of outstanding seniors such as setter Kellie McNeil and freshmen such as booming hitters Taylr McNeil and Alyssa Goehner.

Best state tournament mascot: Wadena-Deer Creek's Wolverine.  A bit rough around the edges, the Wolverine appeared ragged but stayed in front of an enthusiastic student section throughout the tournament.  Unique and interesting.

Honorable mention: He was a bit frightening on the eyes, but Centennial's red spandex man was certainly bold.  Waconia's banana man also drew a few stares.

Best cheer: Lakeville North's "A-B-C ya!"  The Panther fans had it down, as their team passed "A", set "B" and hammered home kills "C ya!" all tournament long.

Best dressed coach: Waconia's Jim Lee.  Lee was decked out in a suit all state tournament weekend, but freshened it up with bright-colored shirts.  Gotta look good when you're the MHSVCA president.

Most enthusiastic coach: Sauk Centre's Jim Klaphake.  When the Mainstreeters closed out a first-round upset of Marshall in the Class AA tournament, Klaphake leaped high in the air and celebrated with the players.  Grinning wildly, he was clearly having fun.

Best band: Wayzata.  The Trojans had a great -- and varied -- repertoire that included Stevie Wonder's "Superstition."  But their drum sequence after every Trojans' point showed they were paying attention to the match, as well.

Best match: Martin County West in five over Minneota.  In a tournament filled with three-set sweeps, this one in the Class A semifinals went a full five before the fourth-seeded Mavericks upset the top-seeded Vikings.  Minneota won the first two, but MCW came back with three straight.

Best fashion statement: It's a three-way tie between the glittery and interesting hair from Wabasha-Kellogg, the alternating blue and gold socks from Minneota and the hot pink and neon green shoelaces from Hutchinson.

Hardest serve: Wadena-Deer Creek's Courtney Volkmann.  You knew you were in for something special when Volkmann began her serve by launching the ball 30 feet over her head.  A few steps, a big leap and a whirling arm swing completed the powerful serve.

Hardest kill: Lakeville North's Taylr McNeil.  It's hard to believe she's just a freshman, but she showed no fear of the moment, blasting 27 kills in the state title victory over Wayzata.  The Gophers have certainly noticed.