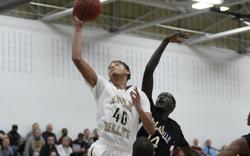 In front of a packed house the two teams in Minnesota with the most talent went head to head at Minnetonka High School.  It was three time defending Class AAA champion DeLaSalle taking on Apple Valley who won a Class AAAA title two years ago.

The atmosphere started with a national anthem that had twists of verbal beauty and everything kicked off from there.  Gary Trent Jr scored early and often sinking his first three shots of the game and giving the Eagles a quick lead.  The size of Brock Bertram eased its way to a pair of early scores while Josh Collins got the defense started with a five-second violation against Tre Jones.

Gary Trent Jr brought the crowd to its feet hitting a jumper, a three, and then another three.  A week ago against Waukee, Iowa Trent had just nine points and a tough game but the Eagles won.  That was in the girls Tip-Off Classic.  A week later in the boy’s Tip Off Classic he was determined for a better result so Gary scored nine points on four shots in eight minutes this time.

Jarvis Johnson threw down a transition dunk that brought everybody in the building to their feet, especially Gopher fans in attendance.  Apple Valley quickly pushed the other way finding Trent in the corner for a three.  Gary bounced up and down the court motioning for the wild crowd cheering the Jarvis dunk to “sssshh” but while doing that Jarvis flew the other way, scored, and produced an And1 bucket.  Not to be outdone, Trent nailed a trey at the top of the key moments later and the crowd building was as energetic as a high school could be.

A timeout was needed so everybody could relax at 25-15.  Sacar Anim came out of the break heavily motivated so he scored seven straight points and nine of the next eleven.  This closed the Eagle lead to 25-22 but a one score edge would only last for a few moments.  Cameron Kirksey picked a great time to step up with positive plays blocking two shots on one end and scoring twice on attacks on the other end.

Tre Jones was dealing with Josh Collins defending him so it wasn’t simple early but a putback score for the freshman and later an attacking baseline bucket opened the game up some at 39-27 Apple Valley.  The Eagles saw their lead drop to eight points with seconds to go in the half but Tre Jones attacked against the clock, hit a floater, hit the AND1 foul shot, and Apple Valley earned a 44-33 halftime lead.

The second half started slow with Apple Valley turning the ball over some more, DeLaSalle continuing to have trouble finishing at the arc (1 of 8 in the first half) and the Eagle lead snuck from 11 to 13.  DeLaSalle grabbed some momentum around the twelve minute mark with Sacar Anim scoring back to back buckets including a Jarvis attack into a dump-off to Sacar.  The score was 55-46 with the Eagles ahead and David Thorson called a timeout.

Out of the break Johnson jumped a passing lane for a steal and a lay-up.  It was the perfect time for the Islanders to make their run but Gary Trent hit an NBA length trey and then nobody on the Islanders could box out 6-foot-11 Brock Bertram so he had double figures with a lay-up.  The score was Eagles 60, Islanders 50 and the fire in the building was back.

At the eight minute mark Sacar dribbled, and dribbled, and dribbled by more until he found his crease to attack.  That attack resulted in a bump from Bertram but the Sacar strength led to him extending to finish while fouling.  The call was made, Sacar hit a free throw, DeLaSalle was down 53-61.   Back the other way Trent attacked deep but missed.  However, no Islander could move Bertram so he tapped in yet another putback giving the Eagles a double digit lead once again (63-53).

DeLaSalle couldn’t get a three to go.  Goanar Mar, Sacar Anim, and Jarvis Johnson all had second half threes look in, and then rim out.  The more they shot the game total of makes stayed the same, one.  To make matters worse, after they missed two on one possession, Trent went the other way and missed a three but drew a whistle as he was hit on his follow through.  Trent sank all of his tosses and Apple Valley went up 70-57 with five minutes to go.

Apple Valley controlled the glass and had countered every punch from their opponents.  Every one.  With two and a half minutes to go DeLaSalle finally got its second trey to go when Jarvis got one to sink on the wing.  The Islanders were within single digits (75-66).  Trent brought the ball up, it was stolen by Sacar, Anim attacked to score, was fouled, made the shot, made the free throw.  Cameron Kirksey was the guilty fouling party and he had fouled out of the game.  A six point game, 75-69.

The momentum was changing.  Apple Valley had more turnovers and they had a couple misses bounce off, but luckily Bertram was there to clean up the mess again.  He scored his fourth put-back of the second half with 80 seconds left on the clock, score was 77-69.  DeLaSalle had one more chance but missed free throws down the stretch closed the door and the Eagles were victorious 83-69.

The biggest advantage of the game?  The Eagles overcame 21 turnovers because they won the rebounding battle 52-19 as Brock Bertram had 14 himself.  A double-double of 17 points and 14 boards.  Trent had 31 points and ten rebounds.  Sacar had a game high 35 points on 13 of 21 shooting while Johnson had 21. 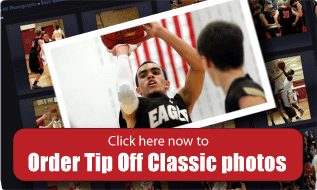