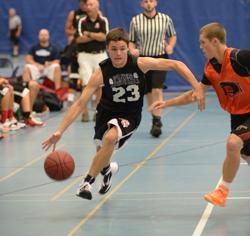 The Breakdown ended the summer open period for coaches yesterday with “The Mega Showcase” bringing nearly 200 teams to the St. Michael-Albertville area utilizing their excellent facilities for one final day of growth between head coaches and players.

The Breakdown ended the summer open period for coaches yesterday with “The Mega Showcase” bringing nearly 200 teams to the St. Michael-Albertville area utilizing their excellent facilities for one final day of growth between head coaches and players.

Click here to view our Wall of Champions from all our July Summer Showcases, including the July 31st STMA Showcase (scroll to the bottom of the page). 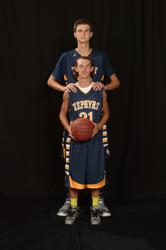 Minnetonka came into the Mega Showcase coming off a strong summer with the school team going 10-2 at Badger and Gopher team camps (losses to top Howard Pulley and Net Gain teams) along with the majority of their team playing AAU together on Real Athletics.  The Skippers capped the summer defeating Tartan, Roseville, and Mahtomedi behind a barrage of three-point shooting led by a great day from Justin Moes.

Tartan and Tonka were close and then three treys in a minute separated the teams.  The Skippers and Roseville were tight but four threes in the middle of the game opened the contest.  The Zephyrs gave Minnetonka the best game of any opponents and were close throughout but that common three-four basket barrier was built by five Tonka threes in the last three minutes of the first half.  Sensing a theme?

Yes the Skippers can shoot and the top launcher was Moes with help from Seth Coatta, Peter Weiss, and Amar Miller. Miller also helped push a frantic pace and Evan Altenburg had one of his best days finishing in the paint.

The Zephyrs earned a lot of respect Thursday with a great inside/out combination of Sam Mustar and Sean Hjelle.  Mustar made timely treys at the top of the key while Hjelle let Minnesota know that if baseball doesn’t work out (super star pitching prospect) he would be a scholarship basketball player.  Agility like that at now 6-foot-11?  Reminds us of a young Alec Brown.

Roseville won two of three games despite not having their top two scorers (Kobe Critchley and Jesper Horsted).  Stepping up in their place was Quinn Johnson, Mitch Poss, and Kyler Briggity.  Johnson opened the most eyes with his combo guard play.  The Raiders beat a young and improving St. Cloud Apollo team led by Ethan Novacinski.

Chanhassen and Shakopee were at less than full strength so they brought younger players and role talent to grow while Tartan played everybody on its roster equally to gain experience and still grabbed wins.  Jordan Horn putting away Simley with late finishes and clutch free throws stands out.  Simley saw the emergence of Alex Anderson inside which will really help them as they have three quality guards (Sam Stensgard, Ben Scheffley, Jack Stensgard). 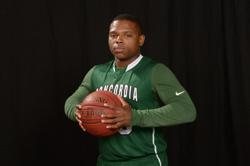 The Jordan Hubmen.  They may just be one of the most underrated programs in Minnesota because year in and year out they are competitive and a threat in March.  This weekend they defeated three improving programs from Rocori, Concordia Academy, and Monticello in convincing fashion.  Senior guard Mitchell Peterson stepped forward as a scorer who needs to be dealt with.  Teams tried to face guard him to take the ball away but that couldn’t stop Jordan from taking the team championship photo.

Rocori walked out of the gym with its head high as coach Nate Guetter has that program doing the right things.  Guetter is an active coach who preaches discipline in a team game as well as consistency of effort.  His Spartans are buying in as their effort was strong and guys like Cole Field and Austin Overaman are coming off good years and will be joined by good young players Derek Thompson and Connor Schoberg.

After Peterson, the division standout was Roger Moore Jr., of Concordia Academy.  This fireplug of a guard was as explosive as anybody knocking out countless treys off his crossover move.  It was like Tim Hardaway Sr. out there with more muscle.  Concordia Academy and Providence Academy both had good days as their programs are headed in the right direction. 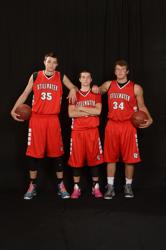 What can you say about Eden Prairie?  They have talent, depth, and toughness for days.  So Carter Coughlin is at a football event? Owen Chose is out with injury? Blake Cashman not available? No big deal.  The Eagles still had the talent to beat on St. Francis, outlast Stillwater, and beat Maple Grove by 20 for the championship.

Coach David Flom couldn’t stop talking about how good Brad Davison (Maple Grove) was and with good reason, Brad did start the game with four quick threes on his way to 18 points, six assists, and six boards. All everyone else could talk about was how the Eagles dominated in the title game playing without three key pieces to the rotation.

When EP looked beat in the semi-final Grantham Gillard turned the tide with seven points in a minute.  In the final his length was too tough for the Crimson as he put up 17 points.  Also scoring 17 with eight rebounds was Jake Ruppert, an active combo forward who there was no answer for.  Not to mention the brute force of John Vermedahl and his frontcourt partners, the skill of Ryan Jacobus and Brady Rudrud, and basically talent everywhere.

Talking state title favorites next year?  Throw in the big names we know and add these guys on that long list too.  They will be tough.

In terms of Maple Grove, they gave us a glimpse of what the future could be.  The Crimson still have STMA and Buffalo heads spinning with ball movement.  Those games made you think Champlin Park’s run through the section has a couple serious hurdles and the Crimson could get state maybe even this year.

That said, Maple Grove still has five sophomores playing heavy minutes and while Davison, Jack Hutchison, Tywhon Pickford, Kayode Awoskika, and Noah Champion are very good, they are still young and EP showed that there is still growing to do.  The Crimson are going to be a top 10 team though for sure.  Davison’s vision is as good as any in 2017 nationally (yep), Hutchison has a brilliant stroke, Pickford can score from all areas, Kayode is a load, and junior Reed Nikko (who was hurt yesterday which greatly affected him) in the middle is a feared group.

Stillwater grabbed some big game experience yesterday beating Osseo in two overtimes and then losing to Eden Prairie as Connor Gamble’s trey was blocked at the buzzer.  Stillwater’s three man senior group of Gamble, Kyle McKinley, and Matt Anderson will lead them to some big wins in the winter no doubt. Gamble is a dead eye shooter with toughness, McKinley’s 6-foot-10 talent continues to expand, and Anderson does all the tough things.

Anderson’s offensive rebound over two players ripping the ball away and scoring late against Osseo followed by the game winning screen that opened McKinley for the score showed what he can do. Stillwater just didn’t have the backcourt depth to beat EP but it could come. 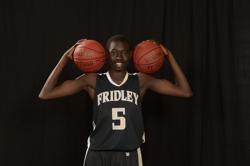 Your winners? Hutchinson. I know what you are thinking, “is this football?” and I sarcastically laugh at you.  Old joke. What is quality is a backcourt of Riley Steenhoek and Sam Pasco.  Riley is the big name and with good reason, he’s scoring at a 20 point per game rate day after day.  Pasco comes to mind because of his playmaking down the stretch in the close games the Tigers played.  His attack to the rim scoring and creating put away Fridley.  Watch out for Hutch in the winter!  And that is said with no sarcasm.

Fridley won’t have much let down either with one of the best big men combinations in Minnesota using 6-foot-6 Tessy Pal and 6-foot-8 Jon Conyers together.  Both have a lot of potential to build but are also playmakers now.  Conyers deflected shots and finished consistently all weekend while Pal erased attempts and threw down in traffic.  With quickness around them these bigs will make an impact.

Hastings, it’s your time.  No Hastings basketball hasn’t been too good for awhile.  And we aren’t predicting a state title. What we are saying is that Sam Skoyen can led a team with 20 a night plus fellow seniors Craig Nielsen and Joe Dittrich all coming off double figure scoring seasons, they should be good.  And they looked good in the Mega Showcase. 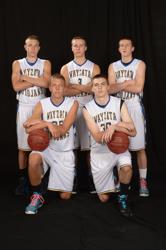 What Thursday really was for Wayzata was the beginning.  The varsity group of Johnny Beeninga, Austin Slater, Ty Gelinske, and Troy Louwagie competed but dropped some games.  They grew through wins and losses.  The JV group? They grew through wins beating varsity groups from Annandale, Delano, and Kasson-Mantorville.  Think of that, a JV team beating two programs that were recently in the state tournament, one of which just played in the Class AA state title game.  That was the start of the Bryan Schnettler era.

Braham, Delano, and Kasson-Mantorville didn’t quite play they wanted to (for different reasons each) Thursday but these are going to be good teams.  Delano was missing its top two guys in Sean Campbell and Matt Kreklow but still managed to come back from 14 down against Coon Rapids.  Kasson-Mantorville has a good sized ball handler in Derek Flom and a scorer in Braxton Raymond who is a known producer.

Then there is Braham.  Yes the Bombers lost some games that had coach Bob Vaughan shaking his head.  That said, John Larson has been scoring in bulk for a full varsity career already (two years left to go), Chris Olson is one of the top stock raisers of the summer, and young Ryan Larson is the most slippery and may be the most dangerous of all their scorers. The glue guy? Connor Tschumper.  From his old school kicks to his long hair, Connor is a worker and a guy that made a great impression.